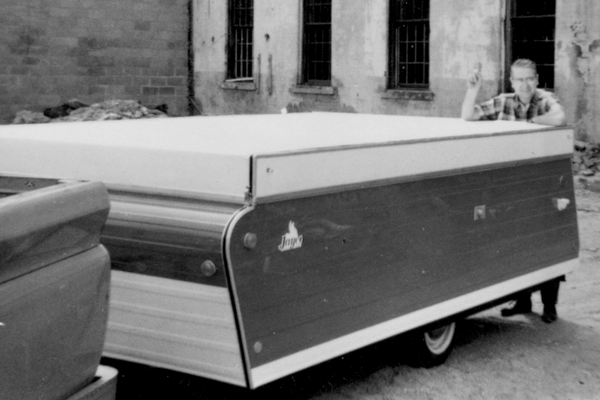 “Lloyd, I think you should go on your own.” Those encouraging words spoken by Lloyd Bontrager’s wife, Bertha, helped the dream of creating a better RV become a reality by launching one of the RV industry’s largest companies – Jayco.

A few years earlier, Lloyd had been tasked with starting the RV division of Star Tank (which would later become Starcraft RV) as he had designed an innovative lifter system that was patented by Star Tank. Always tinkering, inventing, and dreaming, after successfully launching Star Tank’s RV division in 1964, he had the desire to go on his own.

With support from Bertha, and a shared vision of creating a company that would treat everyone – employees, suppliers, dealers, and customers – as family, Jayco, Inc. was born on their farm in two chicken houses and a barn in Middlebury, IN in 1968.

The first year was full of excitement and braving the unknown. From choosing a name, which was inspired by Lloyd’s middle initial “J” and his fondness of the outdoors and birds - with the idea of “being as free as a bird and flying away without any cares,” -  to securing the capital needed for a startup. But Bertha says they always believed, “with faith in God, and our fellow man, we can be successful.”

And successful they were. During Jayco’s first year of business, the company grew to 15 employees and had sold 132 camping trailers.

As the years went by, we continued to find success, weathering the ups and downs that effect the industry, and in 2018 we celebrated 50 years of family fun. Click here to experience more of the Jayco story.