It’s an exciting time in the world of camping. One really big indicator of the growing enthusiasm is the sheer number of RVs that have been sold, cracking 500,000 shipments to dealers for the first time in 2017. We’re starting to see how this surge is translating to the campground in exciting ways; here are a few.

According to Kampgrounds of America’s (KOA) 2018 North American Camping Report, Hispanic, Asian and black folks are camping more and more. In 2017, half of the newest campers were from non-white groups and non-white people now comprise one-fourth of all campers. Get out there and make some new friends!

According to a 2016 Nielsen study performed for Go RVing, in a single year, from 2015 to 2016, the average age of RV owners dropped from 48 to 45. And KOA reports that participation among millennial and Gen X households has grown steadily, exceeding what is observed in the general population. Enthusiasm to camp more frequently is also strong within younger groups.

You’ll also find a more active campground in general. The KOA report says that 6 million new North American households have adopted the camping lifestyle since 2014. And the growth is having a sort of snowball effect: In the past three years, the number of campers who take three or more trips each year has grown 36 percent while the number of campers taking just one trip a year has dropped 10 percent.

More people camping does mean busier campgrounds, but online tools have made it so much easier to check site availability and make reservations. RVparkreviews.com is great for finding reviews of campgrounds, while aggregators like Recreation.gov make it possible to find available campsites and book them no matter where you are.

While many head to the campground to disconnect, those who don’t want to abandon their connectivity completely, or like to work from the road, will be happy to find out that more and more campgrounds are equipped with WiFi networks.

A focus on pets 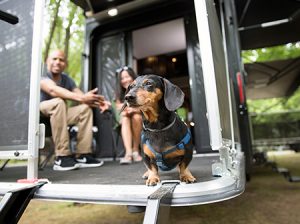 Pet owners know there’s almost nothing that makes you smile like the unbridled joy of a furry friend. Many campgrounds are pet-friendly, and now some have dedicated areas for them to run leash free. This is especially exciting for the city-dwelling pet owners who may not have the space to let their pets get up to full speed. Hey, pets need vacations too!

In addition to WiFi, campgrounds are adding washers and dryers, outdoor theaters, game rooms, organized activities and patio campsites. You can surely find a campground that suits the experience you’re looking for and who you’re traveling with.

The growth in RVing, and camping in general, is undeniable and the changes it’s driving at the campground are exciting. It’s encouraging to see new people giving the lifestyle a try and the conveniences that have come along to make it easier to do so.

Learn about how we are adapting our RVs to the modern camping scene by reading about trends in exteriors, storage design, and interiors. Ready to get on the road and start camping? Find great RV parks and campgrounds to explore! #LetsJayco