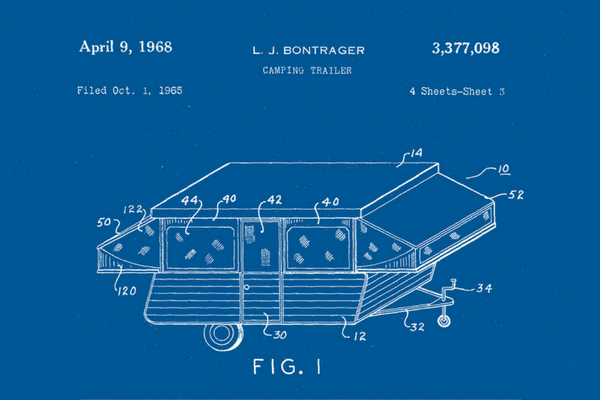 Lloyd Bontrager, our founder, was known to tinker and invent, always looking to do better than his best. In fact, one of his favorite quotes was “Good, better, best. Never let it rest until your good is better and your better is best.” With that spirit engrained into the foundation of Jayco, it’s no wonder that over the years we were first to market and make a mark on the industry with several ingenious inventions.

This invention is what started it all. Lloyd, while at Star Tank beginning its RV division, had come up with an all-enclosed crank lifter system, keeping the working parts from the outside elements that caused corrosion and damage. It wasn’t too long after that he had an idea to improve on the original crank lifter system, which included vertical telescoping posts that cooperated with a curved guide. After getting support from his wife, Bertha, he decided to use his idea of the improved lifter system to go out on his own, launching Jayco.

In the late 1970s, Lloyd’s son, Wilbur, helped develop a domed roof for camping trailers, which answered the problem of water sitting on top of the unit by providing just enough slope for it to easily run off. This design also added structural strength.

With the introduction of the Hawk travel trailer series in the mid-1990s, we began to use our state-of-the-art vacuum-bonded lamination process, which provided a lighter-weight unit that was easier to tow behind family-friendly, lighter, more fuel efficient vehicles. In a dedicated facility, this process involves applying 144 tons of pressure to each wall for 16 minutes to ensure thorough bonding of the wall components. Then we allow them to cure for at least 24 hours in a climate-controlled environment before being installed on the production line.

We were the first company to offer surround sound system components in all products, including entry-level RVs in the early 2000s. Since then, we’ve done our best to stay as current as possible with our product offerings by including iPod® adapters in the mid-2000s, followed by Bluetooth® technology a few years after. Automated ramp doors are now offered on our Seismic toy haulers, which can be controlled with a button on the unit or through an app on your smart phone and voice-activated control is on the horizon.